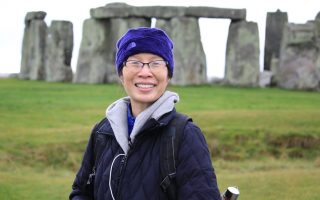 Stonehenge is one of the most famous and oldest sacred sites in the world where people started building 5,000 years ago in the Neolithic or New Stone Age times. These people were farmers and planted crops and raised animals. Today it is believed to have been a temple for ceremonies. Near by there are burial grounds that are perfectly round cone shaped hills called Barrows.

Stonehenge is made of a ring of enormous rectangular stones with smaller concentric rings inside. Pairs of large stones stood side by side with a horizontal lintel on top of them called Trilithons. The pairs were lined up in a circle. The name Stonehenge comes from Old English where people thought the Trilithons looked like a “henge”, which means “to hang.” Stonehenge started small and grew over a thousand years.

Inside the outer ring of large stones are a smaller horseshoe shaped ring of Bluestones. In Wales, were more of the Bluestones are found, folk tales tell of their healing powers. It is believed that people came to Stonehenge for the healing power of the stones.

For those of you into crystals and stones, the Bluestones are made of Presli dolerite, rhyolite and volcanic ash stone. They say that Stonehenge is at the center of a hub of networked ley lines, which are the energy lines of the earth.
The cool thing about the circle is the center opening of the ring aligns perfectly with the mid-winter and mid-summer solstice sunset. The rays of the sun connect the altar stone with the heel stone in a straight line shining through the circle. Interestingly, inside there is a smaller concentric circle of larger Trilithons stand. The tall one in the center lines up with the sun as well as once a month with the moon when it sets.

Stonehenge is now a popular pilgrimage site where both tourists and those seeking to travel to sacred sites come to visit.