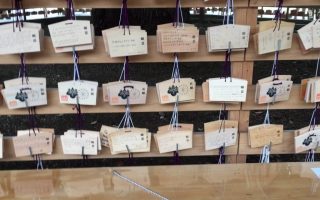 I created a wishing prayer for everyone, here's how it's done at the Meiji-Jingu shrine. Come watch and see if you can answer the question at the end with your intuition.

The Ema tables are small wooden plaques that people write their wishes and prayers on to God. The word Ema in Japanese is made of two characters, one means “picture” the other “horse”. Back in the old days people would donate a horse to the shrines so the Gods would more likely listen to their prayers. Eventually, for most people, the horses became too expensive so they then made small statues of horses out of wood, paper or clay. These evolved into wooden plaques with pictures of horses on them. The plaques stayed and the pictures changed. Some of the tablets are art forms. The art or pictures often depict a relevant image associated with the shrine that supplies them for visitors.

Anyone can buy an Ema tablet and there are no strict rules on what to write, though most people put down their wishes and prayers.