How to Feed the Deer at Nara 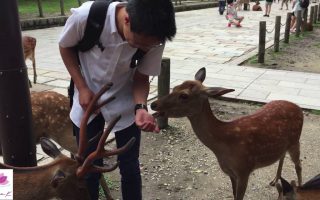 How to Feed the Deer at Nara Park Japan. There's a technique to it!
First… what NOT to do….This was our experience in feeding the wild deer. We learned a lot, and can show you how to get the deer to “bow” for the rice cakes.

In Nara, Japan, the wild deer (sika deer) roam freely and are considered national treasures. They were once deemed sacred and to do them harm would be punishable by death. The legend was that a deity had come to visit Mt. Mikasa riding on a deer, thus they are considered sacred. The park they live in is at the foot of a mountain called Mount Wakakusa.

Over the years the deer have come to trust people. There is an official deer food company that provides deer food (special rice cakes) for sale to the public. Tourists and the deer know the deer can be fed near the temples. The deer are famous, but be warned, they are still wild and are not tame.

Nara park also houses a humongous buddha statues in the largest wooden building in the world called Todaiji temple (to be seen in another video). You have to pass through the deer to get there!