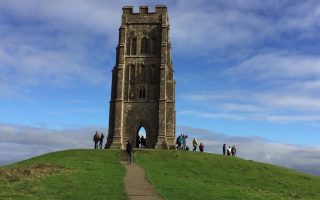 Glastonbury Tor combines, Archangel Michael, ley lines, a Fairy castle, and King Arthur's Avalon in one place! We're going to climb to the top to find out what is there.

Glastonbury Tor is a hill near the town of Glastonbury in the English county of Somerset. At the top is St Michael's Tower, which is all that remains of the stone Church of St Michael built on the site in the 14th century.

The Tor, like Glastonbury itself, is linked to the legends of King Arthur and Celtic myths. It is said that the King of the Fairies, Gwyn Ap Nudd, lives in a crystal castle with the fairies deep inside the hill.
Lisa K. http://www.LMK88.com