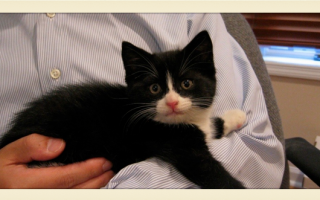 “Synchronicities and so-called coincidences are clear signs that the Divine Source is knocking on your door. Sometimes it could be a soft tap or for those times when you’re not paying attention or it could be a loud bang! I refer to Synchronicities as my divine nudges. For example, it’s when I hear the same phrase or saying from more than one person in a day? It’s when the same numbers keep showing up in your life? Has someone mentioned the same person you were just thinking of? Have you met someone out of the blue who seemed to answer a question that you were just pondering? These are all just signs for you, and I encourage you to pause, be open, and pay attention but most importantly, acknowledge that the source is sending you a message.”

My favorite story of synchronicity is about my cat D’Artagnan, or as I often call him “D”. We already had a cat, Shayna, who was a “One Cat” cat. Shayna was old and we knew she hated other cats, so we never considered getting another one. One Saturday, my husband and I were rushing to get my son to soccer practice because we were late. On the way my husband made a wrong turn. My husband never makes a wrong turn. I told him, that’s okay just go through the back way and as we did, we were stopped by a traffic jam. I thought it was an accident and looked for a way around it, but the SUVs that were in the road were stopped sort of at odd angles on either side of the street. There was no way we could drive by. People were standing around looking under one SUV, one man had a stick was was poking under it. He was poking at a little ball of black fur, a kitten. Then the kitten bolted out from under one SUV and ran across the street to hide behind another. Inside that SUV a lady got out of the driver’s side and as she did, the SUV lurched slightly forward. I heard the kitten starting to cry, the woman panicked and sent someone to get help. I thought, oh gosh these people don’t know what to do! I quickly got out of the car and ran over to see that the kitten was now snugly held between the tire of the SUV and the curb. He didn’t seem hurt just frightened. I knelt down and tried to pull him out by the scruff of the neck, but he wouldn’t budge, he was tense and held tightly in place. I was about to give up and wait for more help when a voice in my head said loudly “Pull as hard as you can!” So I pulled really hard one more time and out he popped. I was in a rush so I offered him to the lady from the SUV and she said, “I was going to take him to the ASPCA, but you seem like you know what you’re doing.” So I reluctantly said, “I guess I can take him.”

As we drove with the kitten in my lap to soccer, he lay there quietly and every now heaved a big sigh and then would look at me, right into my eyes. I thought I can’t take him to the ASPCA, they pick up diseases there. So I brought him home with the intention of giving him to a friend who I knew would welcome him. Well, it turned out we weren’t late for soccer, we had gotten the time wrong and we were actually early! It also turned out that my friend’s husband was extremely allergic to cats and she couldn’t take him. After a while we started to realize, hey this is too strange to ignore, there must be a reason this kitten ended up in my lap. What are the odds that we would rush out of the house at a mistaken time, make a wrong turn, just happen to run into a traffic jam that we couldn’t get around and have the kitten run to just the spot where the SUV would just happen to snugly hold him in place so I could pull him out? Believe me, we were in a rush, so had he run off I certainly would have gotten right back in the car to get to soccer. 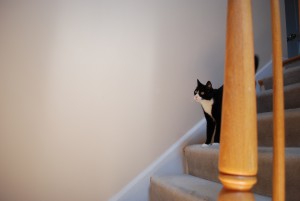 D'Artagnan all grown up. – photo by ChrisK

We then thought about Shayna, who didn’t really seem to like D but she also seemed to accept his presence reluctantly. Being the highly intuitive psychic cat that Shayna was, she also seemed to know that he was here to stay for all of us. So we decided to keep him. D’Artagnan has turned out to be a wonderful companion all of us, he is young and spry, gentle and loving. He really is a blessing. Shayna and D’Artagnan did get along pretty well, and they both were concerned for each other when the other wasn’t feeling well. I think Shayna actually liked the companionship. Two years after D came to us, Shayna passed away. I’m so glad we didn’t give him away and that he was given to us by the Universe, plopped right in my lap, so to speak, through synchronicity. Thank you God!

Here are some tips on how you can attract more synchronicities in life: