Signs and Messages From Above 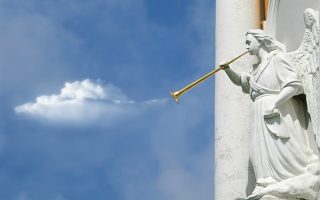 Do you ever look for signs that you're on the right path?

Do you ever want to hear a message from above that supports and guides you? I know I did. I found out how.

When I first learned to work with my intuition, I learned how to connect to my angels through intuition. Intuition can bring you messages from above if you will. Angels are messengers that bring you those divine signs and messages.

Back when I learned about angels talking to us through intuition I figured that angels were safe. After all, they're in the Bible. I love angels and believe that they do exist. Over time, I've come to know that angels are with us all the time. Your intuition is their “voice” so to speak because they use your intuition as one of the ways to communicate with you. By definition, angels are messengers of God.

They exist to help us on our life's path and they give us guidance as well as pass God's messages to us. Now, at first, I learned how to hear my angels and then write down the words they were giving me. It was the first time I'd ever done anything like this. I wasn't sure what I would receive, if anything at all.

The idea is to set your intention to get a message from them and then ask them a question. It's very similar to using my intuition on demand technique. I remember learning how to do this, sitting down to try it, and wondering, is this real? Maybe I'm not going to get anything. I half expected it to be gobbledygook.

I was super surprised that the messages didn't come as like an instant download. In fact, the words came very slowly. It was so slow that I didn't really know if they were going to make any sense at all. I didn't rush it. I just wrote down the words one at a time, like dictation. Then I went back to read them.

Angel messages have certain characteristics just like intuition. What I love about the messages is they're always gentle, loving, never mean or scary. They seem to have a warm vibration to them. When I listened, it felt warm. It felt calm.

I began like this. I asked my angel, “Are you really there? What do I do to hear you?”  Then a word or two words came, then a pause, and another, then another word or two. And so on.

When you hear me,

you will know me.

That was it. It was so slow that I really didn't know whether it made any sense at all. But when I read it back again, “Speak to me, open to your awareness, open your heart. Listen to me. When you hear me, you will know me.” I was shocked to say the least, but I was really happy. It was the first time I ever did anything like this.

I received a message and it was warm and it was inviting. A few months later after practicing this every day, I received more. And again, it came slowly. But when I started to read it made sense.

Your eagerness is divine. Your nobleness is good. God's own love for you is grand. He is still with you. Start thinking of the best way to approach me through prayer, divine, love and faith. You can pause and I will be waiting for you. Faith and patience is trust.

I love that last part. Faith and patience is trust. These were the messages that I was receiving through my angels from my Creator, All That Is, or God. Eventually as time went by and I worked with connecting with my angels, my trust grew.

I still love angels, and my angels in particular, they have been with me always. I've relied on them many times to support me and give me divine guidance. They've been there during my toughest, most scary moments in my life and gotten me through all those tough times. They were there.

Asking for Angels for Help

When I thought it was going to die from endocarditis, which is a heart infection, they were there.

I had just been admitted to the hospital the night before because my symptoms had gotten worse and my new doctor said I needed to go to the hospital right away. They gave me intravenous antibiotics to kill the bacteria in my blood, but I reacted badly to the medicine. They had to stop giving me that life saving drug. Now I was really worried. What if the antibiotics don't work? What then?

The next morning I was lying in my hospital bed and I ached from head to toe. My big joints, my hips, my knees, my shoulders were screaming in pain. I was so weak. I knew I couldn't sit or stand up. I prayed and asked for my angels to help me and just be there with me. Just then I looked down and I saw all over my hospital again was written the word “angel” over and over again. I hadn't noticed it before!

Then I heard that small still voice say softly, but clearly “you'll be okay.” My mind and my body immediately calmed down and I was okay. In the end, they finally found another antibiotic that my body could tolerate and it all turned out fine.

I thought my husband was going to die in 9/11. That day I knew he had evacuated his office across the street from the very building that was hit by the plane. Then I watched the building fall on the TV news broadcast. I knew he was out on the street in front of the building.  I didn't know where he was at the time when the building fell. I just knew he was out there, outside, in front of that building. That massive structure that was a quarter of a mile high.  I was thinking,”Where did that all go? It's so big. Where could you stand where you'd be safe?” I was frozen with fear and I realized, “Oh my God, what if he was there under the building?” I prayed to my angels. They were there to keep me calm and be in the moment for what seemed like an eternity until he called me to tell me he was okay.

They're here with me now. And they're always here with me and it is so comforting. Now I don't talk too much about angels intuition because ultimately if you believe in them or not, your intuition is there to give you information you wouldn't normally get using your thinking mind, but I know that believing in something outside of me surely has made my intuition stronger and easier to trust.

I know we can hear angels and get signs and messages from them. They have given me signs and messages over and over. Now, if you have an angel story, I'd love to hear it. Click on that little question mark in the bottom right corner and you can send me a message.